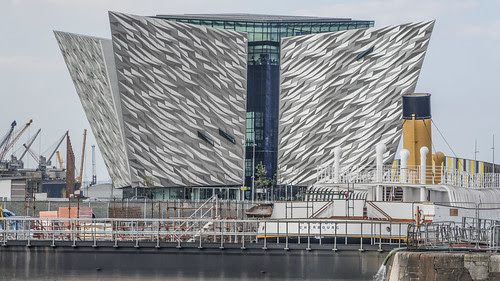 Titanic Belfast: Visitor Attraction And Monument To Belfast’s Maritime Heritage, a photo by infomatique on Flickr.

Titanic Belfast is a visitor attraction and a monument to Belfast’s maritime heritage on the site of the former Harland and Wolff shipyard in the city's Titanic Quarter. It tells the stories of the ill-fated RMS Titanic, which sank on her maiden voyage in 1912, and her sister ships RMS Olympic and HMHS Britannic. The building contains more than 12,000 square metres (130,000 sq ft) of floor space, most of which is occupied by a series of galleries, plus private function rooms and community facilities.

The building is located on Queen's Island, an area of land at the entrance of Belfast Lough which was reclaimed from the water in the mid-19th century. It was used for many years by the shipbuilders Harland and Wolff, who built huge slipways and graving docks to accommodate the simultaneous construction of Olympic and Titanic. The decline of shipbuilding in Belfast left much of the area derelict. Most of the disused structures on the island were demolished. A number of heritage features were given listed status, including the Olympic and Titanic slipways and graving docks, as well as the iconic Samson and Goliath cranes.

The derelict land was renamed the "Titanic Quarter" in 2001 and was earmarked by Harland & Wolff for redevelopment over a ten-year period. An area of 100 acres was subsequently bought by Fred Olsen at a cost of £46 million, with 23 more acres set aside for a science park. A further 78 acres was sold by Harland & Wolff in 2002 to be used for a new development including houses, hotels and entertainment amenities plus a maritime heritage museum and science centre.

In 2005, plans were announced to build a museum dedicated to Titanic to attract tourists to the area, with the aim of completing it by 2011 to mark the centenary of Titanic's launch.

A number of ideas were put forward for the attraction. Among ideas considered were reconstructing the massive steel gantry in which Titanic and Olympic were constructed, or building an illuminated wire frame outline of Titanic in the dock in which she was fitted out. In June 2008, details of the £64 million scheme – known then as "Titanic Dock" – were announced.

Northern Ireland's Tourism Minister, Arlene Foster, announced that the Northern Ireland Executive would provide 50 per cent of the attraction's funding through the Northern Ireland Tourist Board, with the remaining 50 per cent coming from the private sector, in the shape of Titanic Quarter Ltd and the Belfast Harbour Commissioners. Additional funding was pledged by Belfast City Council. The task of creating the visitor attraction was taken on by the Titanic Foundation, a charity which aims to "educate people on Belfast's social, historical, industrial and maritime heritage through the story of the Titanic".

The building, now known as Titanic Belfast, is expected to attract 400,000 visitors annually, of whom between 130,000–165,000 would come from outside Northern Ireland. It is intended that it will serve a similar function to that of the Guggenheim Museum Bilbao, designed by Frank Gehry, as a focus for the regeneration of the city. It forms part of the Titanic Signature Project to regenerate Titanic–related heritage sites in the Titanic Quarter, including the disused headquarters and drawing offices of Harland & Wolff, the SS Nomadic – the last surviving White Star Line ship – and Hamilton Dock, Titanic's dock and pump house and the Titanic and Olympic slipways.

In front of the building is Titanica, a sculpture by Rowan Gillespie depicting a diving female figure. Made of bronze, it is mounted on a brass base, evoking the design of figureheads on ships' prows, and is meant to represent hope and positivity. The figure was dedicated by representatives of the Anglican, Catholic, Methodist and Presbyterian churches on 27 March 2012, a few days before the opening of Titanic Belfast