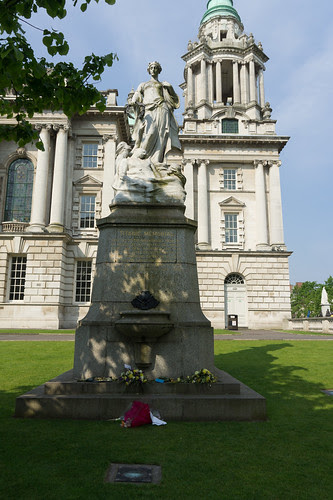 The Titanic Memorial in Belfast was erected to commemorate the lives lost in the sinking of the RMS Titanic on 15 April 1912. It was funded by contributions from the public, shipyard workers and victims' families, and was dedicated in June 1920. It is located on Donegall Square in central Belfast in the grounds of Belfast City Hall.

The memorial presents an allegorical representation of the disaster in the form of a female personification of Death or Fate holding a laurel wreath over the head of a drowned sailor raised above the waves by a pair of mermaids. It has been used as the site of annual commemorations of the Titanic disaster.

For a while it was obscured by the Belfast Wheel that was removed in April 2010. It is now the centrepiece of a small Titanic memorial garden that was opened on 15 April 2012, the centenary of the disaster. Together with the garden, it is the only memorial in the world to commemorate all of the victims of the Titanic, passengers and crew alike.